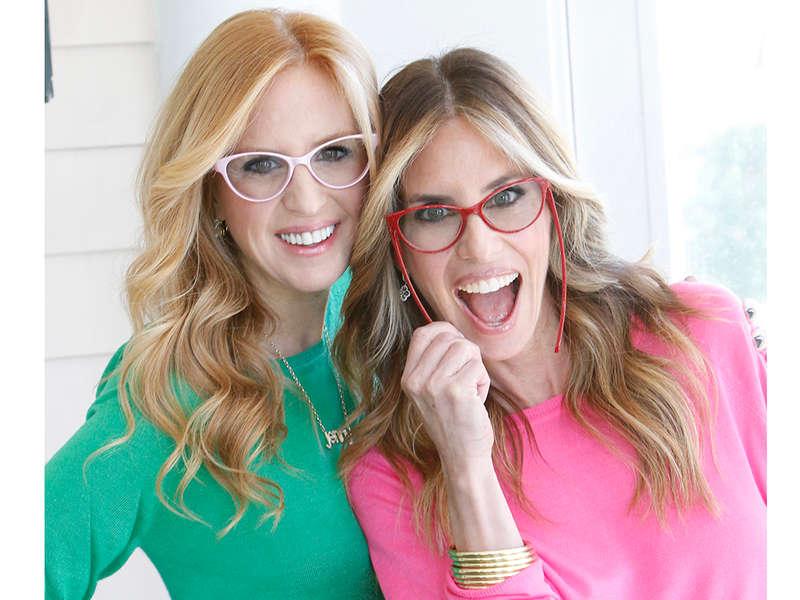 About a year ago, Stacy and Jenny were sitting side-by-side, as their hair was getting colored at a Manhattan salon—and they were frustrated. There was no way, they realized, for them to wear their reading glasses and get their hair colored at the same time. Then, like Tess McGill in the movie Working Girl, saying "Trask, radio; Trask, radio," they had an idea. It was time, they decided, for a new kind of reading glasses—which could be worn while coloring your hair, cooking dinner, giving a presentation, sitting at the dinner table, or doing just about anything else. After several rounds of prototypes, this concept became Bunny Eyez™, the ideal pair of reading glasses for whatever you're doing. The unique, patent pending design features proprietary black diamond hinge technology, which enables wearers to put their readers on in the traditional way—or flip the temples for an entirely new experience.

· Flip them at the hair salon, so they're not in the way of your coloring. Flip them after cosmetic surgery, so they don't have to sit on your face. Flip them during a face mask, so you limit the mess! Flip them while cooking, so you can read your recipe, knead your dough, and never get food in your hair!

The sisters continue to innovate. Coming soon are a line of sunglasses, Bunny Eyez Sunnyz, which feature the same proprietary technology, as well as Bunny Eyez Guyz, a line of readers for men.

All of their designs are fashionable and functional!

Get to know more about Jenny and Stacy by shopping their Top 10 essentials and following Bunny Eyez on Instagram!

What inspired the idea behind Bunny Eyez:

Stacy & Jenny: After we turned 40, we both needed reading glasses and realized how inconvenient it was to wear them while multi-tasking and doing our favorite activities. One afternoon we were side by side getting our hair colored at the Serge Normant Salon (with Gina Gilbert) and realized that it was impossible to wear reading glasses while getting our hair colored; not all our hair would get colored! This sparked an “aha” moment, and we started googling the kind of reading glasses we wanted to have. They didn’t exist. So, we created them.

What was the biggest challenge you were faced with when creating your line:

Stacy & Jenny: We had no idea how to invent an actual something! We had to find a manufacturer to make a prototype and then we had to build an actual usable product. We were faced with the challenge of creating something gorgeous, fashionable, fun, and useful, all with a price tag that would work for every budget. We wanted all women, and soon guys (we are launching Bunny Eyez Guyz this fall), to be able to afford our Bunny Eyez reading glasses.

Stacy: It is just so fun. I really love all the feedback from our customers who are just going bananas over Bunny Eyez.

Jenny: I have been broadcasting for almost 13 years on SiriusXM and on TV. Up until now, my business has been about me! I am really enjoying the shift of my work being more about Bunny Eyez. Plus, being able to work with my sister, and see our vision making other people happy, well, it is an incredible feeling.

One piece of advice you would give your 18 year-old-self:

Stacy: You have NO idea what life has in store for you so please try and enjoy each day and don’t sweat the small stuff.

Jenny: Try everything. You may fail five times before you succeed, but that makes the success even sweeter. There is no such thing as an overnight success so you better enjoy the process.

Walk us through your typical work day:

Stacy: Usually Jenny has texted me 10 times by the time I wake up at 6 AM!!!! No, seriously, we pretty much work on a 24-hour schedule right now. That's how it is with a startup. There are no set hours.

Jenny: Like Stacy said, I am compulsive about communicating with our customer and making sure they are satisfied. So each day, Stacy texts me, or I text her about an interaction. We check in with the warehouse for quality control, and we check in with our website throughout the day too. We also work on our social media ‘round the clock. I also prep for my daily radio show on Sirius XM Stars channel (It's called “Just Jenny”. Check it out!).

Your most recent beauty or fashion discovery and obsession:

Stacy: I am amazing with hair. Could actually work at a salon doing blowouts.

Jenny: I am a singer, and also, I can get doctor’s appointments the same day I need them. I know. crazy.

Where does your credit card get the most use: