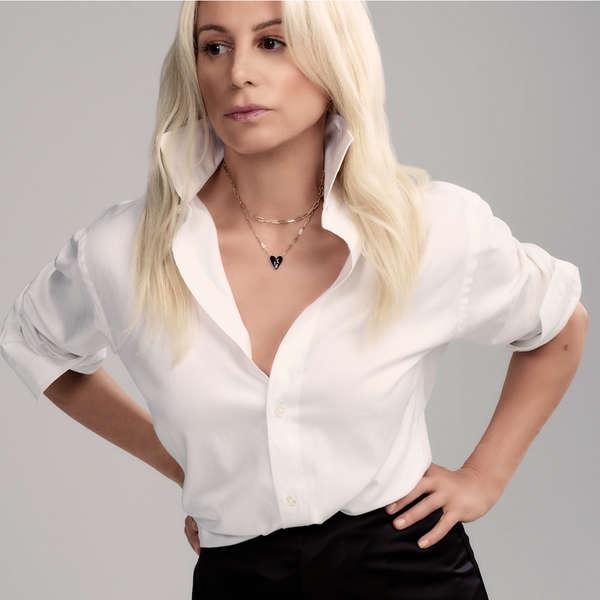 Welcome to Talking Top 10, a recurring series in which we feature the founders, CEOs, creators, and leaders who are shaking up their industries. Ahead, read our Q&A with Creative Director and Founder of Jennifer Fisher Jewelry, and keep scrolling to shop her Top 10 must-haves.

A Santa Barbara, California native, Jennifer Fisher began her career as a wardrobe stylist working on feature films, television shows, and commercials in both New York and Los Angeles. After 10 years of dressing and styling Hollywood, Jennifer met her now-husband, Kevin, and they settled in New York City, where Jennifer’s company is now based. Upon the birth of the couple’s first child, Shane, Jennifer began to look for a piece of fine jewelry that not only spelled his name, but also expressed her own personal style. Unable to find anything unique, Jennifer designed a piece with Shane’s name stamped on the front that she styled with a long, thick link gold chain. When friends, family, and even strangers began to request that Jennifer design one for them, Jennifer Fisher Jewelry was born in 2005. Six years later, Jennifer continued to expand her line with the launch of her brass collection. From large cuffs, statement chokers, and earrings to stackable rings, the brass collection allows her to offer her signature jewelry to a growing customer base at an accessible price point. In May 2014, Jennifer Fisher opened her flagship store on New York City’s lower Fifth Avenue. In 2017, Jennifer expanded her business into the culinary realm with the launch of her first custom blended dual-purpose salts: Jennifer Fisher Universal Salt, Jennifer Fisher Curry Salt, and Jennifer Fisher Spicy Salt. Jennifer Fisher Jewelry has established a loyal fan base of top celebrities such as Jennifer Lopez, Katy Perry, Michelle Obama, Naomi Watts, Rihanna, Tracee Ellis Ross, Sarah Jessica Parker, Hailey Bieber, and Selena Gomez to name a few. Additionally, Jennifer has been recognized for her accomplishments as a designer. In 2012, Jennifer was a top 10 finalist in the Council of Fashion Designers of America (CFDA) Vogue Fashion Fund Competition. She became an official member of the CFDA the following year. In 2014, Jennifer was nominated for the CFDA Swarovski Accessories award. In 2016, she was honored with the Influencer of the Year Award at the annual Accessories Council Excellence (ACE) Awards. Jennifer received the Retail Innovation Award at the first-ever Town & Country Jewelry Awards in May 2018. In June 2019, Jennifer was nominated for the CFDA Accessory Designer of the Year award. From 2017-2019, Jennifer was as an American Express Platinum Ambassador, serving as an advisor and giving exclusive insight to the new generation of Platinum card members. In addition to being a designer, entrepreneur, and mother, Fisher is a sought-after speaker known for her motivating presentations on fashion, entrepreneurship, and brand building. She has spoken at Harvard Business School’s Retail & Luxury Goods Conference; Savannah College of Art & Design’s annual celebration of the best in design, SCADstyle; MIT Sloan’s annual Retail Conference and the annual Accessories Council Summit.ennifer resides in New York City with her husband, two children, and dog, Tito.

How did Jennifer Fisher Jewelry get its start?

I was born and raised in Santa Barbara, California. I began my career as a wardrobe stylist working on feature films, television shows, and commercials in both New York and Los Angeles. After college, I worked as a wardrobe stylist for 10 years for national ad campaigns like American Express and Budweiser. It wasn’t glamorous but paid better than fashion jobs—I had teams of girls working for me and could easily juggle two, three, and even four jobs at a time. After 10 years of dressing and styling Hollywood, I met my husband, Kevin, and we settled in New York City, where my company is now based. I was living and styling in NYC for an LA-based director when I was diagnosed with a desmoid tumor. I went through multiple rounds of chemotherapy, to shrink my tumor, all the while working on ad jobs. This is when my husband Kevin, who you may know through my Instagram stories, proposed to me. He actually popped the question on Halloween night right before we were about to throw a big party. Ten months later, we were married in Santa Barbara. When we wanted to have children, my oncologist didn’t think it was a good idea for me to carry a baby because my tumor grows from estrogen, so we went through the process of hiring a surrogate to carry for us in California. After multiple rounds of IVF where our surrogate was pregnant twice and miscarried twice, we came back to New York and we decided to try IVF on our own, against my doctor’s orders. Unsuccessful yet again, my doctors recommended that we adopt or get an egg donor. I needed a break from it all and took the summer off. That’s when I became pregnant with my son Shane, naturally. Against the wishes of my oncologist, I carried my baby. After a perfectly healthy pregnancy and baby boy later, I learned that my tumor had actually shrunk from my pregnancy. After Shane was born, I began receiving jewelry gifts to represent him in the form of single letters that were very dainty and weren’t very me. Shane’s birth was a major deal for us, I wanted something to wear that represented him in a way that felt like me and expressed my personal style. When I couldn’t find it, I decided to go up to 47th street in Manhattan and design and produce something myself. I designed a dog tag charm with Shane’s named stamped on the front that I styled with a long, thick link chain. I didn’t take it off. I wore my dog tag on set while styling and started to get multiple requests for the same necklace. A hairstylist friend of mine was working with Uma Thurman at the time and suggested I make something for Uma that represented her kids. She ended up wearing it on the cover of Glamour Magazine and Jennifer Fisher Jewelry was born.

Can you walk us through a typical workday?

I am normally the first person to arrive in the office around 8:15 a.m. after I drop my daughter off at school. I work every day, all day. I am normally here until 6 p.m. when the team leaves, sometimes I am here after, depending on the day. My day consists of meetings, meetings, meetings, interviews, interviews, and more meetings. I try to get some form of design done every day, but our schedule is pretty packed right now, so a lot of times I end up doing that out of office because the office is always busy and I’m interrupted all the time. Sometimes I’ll pop out to see clients in the showroom, but it’s getting to the point now where I really just let my team handle it.

What’s the most rewarding aspect of your job?

Making people happy and helping them represent their family in their own unique way.

What advice would you give to an aspiring jewelry designer?

Don’t take no for an answer. Keep going. Stay in your lane. It’s not about reaching out to other designers for advice, it’s about paving your own way and learning on your own.

What jewelry trends do you predict will catch on for 2020?

Hopefully, the hoop will continue. It’s always hard to predict this, you never really know what is going to happen. I think that chains are coming back, in heavier chain necklace styles. We are going in that direction ourselves so I am hoping that will catch on.

If you had to pick one must-buy from your line, what would it be and why?

The Baby Samira Hoops. They are classic and you will have them forever. You can also wear them day to night.

What are your current beauty obsessions?

Your whole day was just canceled and your schedule is now wide open. What do you do?

Go out to lunch and have a cocktail.

What’s next for Jennifer Fisher Jewelry?

You’ll have to watch and find out!